I may have Doritos on my face, but no PA in my lungs!

Back in October, we found out Dean had cultured Pseudomonas aeruginosa, a common bacteria found in water, soil, etc. Normally the bacteria doesn't bother anyone but for Dean with CF, his lungs form an ideal breeding ground for this bacteria that likes to grow in warm, moist environments.  This is dangerous because repeated lung infections from PA are the leading cause of decreasing lung function in people with CF. Most oral antibiotics cannot attack the bacteria so Dean's treatment consisted of 28 days of an inhaled antibiotic, Tobramycin (called TOBI) 2x a day.  The inhaled TOBI is concentrated in the airways and targets the area infected with the bacteria.  It made Dean tack on an additional 20 min inhaled/nebulized anitibiotic after his morning routine and then again in the evening.  I thought getting a 19 month old to sit somewhat still for 30 minutes was hard (his normal daily treatment time); 50 minutes seemed excruciating.  I stressed over it all...sometimes we only lasted 17 min, other times the full 20...once only 13 minutes (ugh)!  I felt sure that the few minutes we missed were going to cause us to not get rid of the bacteria.  I stressed about him having his binky in during the treatments but it's really the only way we can get him to stay there without flailing all around.

This was our first experience with PA.  It broke my heart when I heard.  I had previously read that about 40% of CFers between 6 and 10 have had PA infections in their lungs.  How in the world could our 1 year old get it?  Was that so bad that it will damage his lungs? Will the TOBI work?  Sometimes I forget that the data for the little ones just isn't there.  Newborn screening for CF is relatively new in many of the states (within the last 6 years for many of the 50 states) so the data just doesn't exist for effectiveness for some of the treatments that we will be faced with.  However, for the strain of PA that Dean had (non-mucoid), this treatment was proven to work in kids 6 and above.  We were told it could sometimes take a 2nd or 3rd round of TOBI (coupled with a separate oral antiobiotic) to combat this bacteria.

In typical Dean fashion, he adjusted quickly and went with the flow.  He had his moments but overall, did great.  He...amazes...us.  After the 28 day cycle, Dean had a throat swab and the culture came back psudeomonas free.

We are in the clear.  No cough, cold, congestion.  I quickly learned to stop complaining about the normal 30 minutes of treatments that he has daily and I am believing that they too have to be working.  I constantly learn each step of the way, not only medically (learning new terms and what questions to ask, new precautions to take) but also have learned to be more content.  I can't predict and plan what is going to come up so I've learned to appreciate the little things (so cliche right) but it's true...

...the silly comments that the kids make, the crazy loudness that a Sunday conga line brings, the fascination and wonder about how in the world our ELF got into the fishtank, the smile that only one of your own can bring.  They live in the moment, I am so trying to get there but as a start I'm more content than ever, more thankful than ever, more blessed than ever.

Abbot Laboratories sponsored a contest, the CF Chef Challenge, to launch a new online nutrition resource that allows those of us touched by cystic fibrosis to share recipes.  CFers need to maintain a high calorie, high fat, high protein diet because they burn more calories than normal because their body is working hard to deal with all of that sticky mucus.  So those low fat, low calorie recipes that many deal with daily just won't do!


To launch the site, they held a CF Chef Challenge, where you submitted a recipe (and your CF story) and a winner was chosen in the Breakfast, Lunch, Dinner and Snack categories.


The judges (Michael Symon from the Food Network, the legendary Boomer Esiason, Ali Christensen from America's Got Talent and a CFer herself, and Suzanne Michel a registered dietician) held a taste test and chose the winners.  I can't claim to be a cook, but my chicken salad did take first in the Lunch Category!


Here is a link to the main website Chef4CF.


Click here to see the videos of the taste test and the recipe. 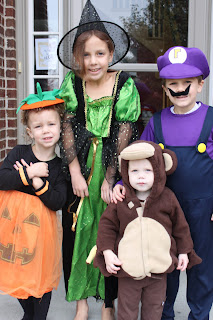 Happy Halloween from our bunch (a witch, WaLuigi, a pumpkin and a monkey).  Fun times with all the Halloween activities and way too much candy.  I'm having a hard time not swiping a Snickers everytime I pass the large purple bowl!

We're all on the mend over here, feeling a lot better, adjusting to the new treatments and looking forward to the launch of our 2012 Fundraising committee - our kick-off is Friday, November 4th at 6:30pm.  Contact us if you'd like to be a part of it.  We need all the help we can get! 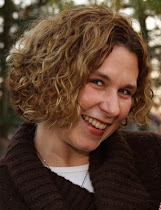 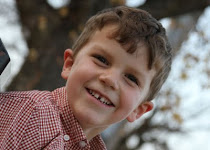